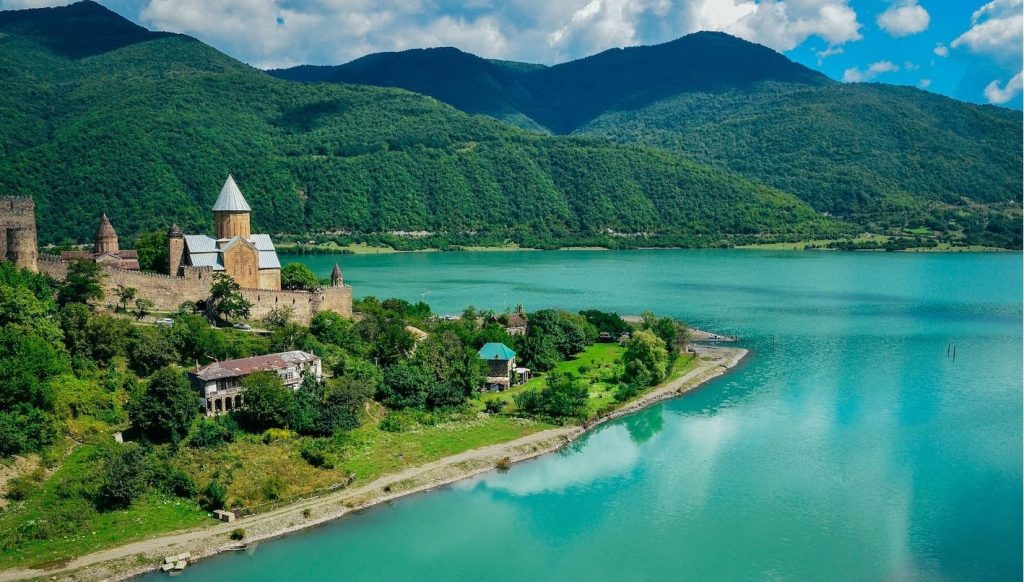 Most of the world calls this place Georgia, just like one of the states in USA, so sometimes people are confused. There are some controversial legends on the etymology of this name. Some consider that it is derived from St. George, the patron of this country, others think it originated from Georgi – the Greek name of agricultural tribes, and some also think that this word is derived from Persian-Arabic Gurg, which literally means the land of wolves. However, locals call themselves Kartveli and their country – Sakartvelo. The word most probably signifies a place and people from the central region in Georgia – Kartli.

Georgia is a small country with only 3.7 million in population, about the same as Uruguay, Congo, Kuwait, and Croatia. It is located directly on the cross road of Europe and Asia, just between Russia and Turkey. Georgia is surrounded by Caucasus Mountains and Black Sea. Southern border is shared with Armenia and Azerbaijan. Its territory is slightly less than 70,000 km2 (43,000 miles), about the size of Panama, Sierra Leone, Sri Lanka, and Ireland. Georgia, with its diverse landscape is located mostly in subtropical climate zone. It means that the country’s west is humid and hot, while east is more dry, however the temperature is highly depending on elevation. Lowland has some rainforests and swamps as well as a beautiful coastline of approximately the same length as in Suriname, Guinea, Bulgaria, and Cambodia. At the same time it is a very mountainous country with highest peaks above 5,000 meters (16,000ft) just like Maipo (Andes), Mount Kenya, and Malika Parbat (Himalaya). Such a variety of microclimates is the reason of Georgia’s amazing biodiversity and natural sightseeing all around the year.

Present Georgia is a small country with huge ambitions and modest possibilities. There is no oil, no high-tech development, and there is no abundance of gold or precious minerals in the present Georgia. What makes Georgia unique? Location!

You can easily travel to Georgia from almost anywhere in the world. Air travel is not cheap, but the country is well accessible. There are international airports in all 3 biggest cities. Besides you can always enter the city by train or car. Bus and train travel in Georgia are among the cheapest in the world (source: www.goeurope.com) Prices here are low. Famous Big Mac index by Economist compares prices of hamburgers in McDonalds all over the world and it revealed that the price in Georgia stood at 2.53 USD in February 2016, obviously lower than 4.00 USD in Euro zone and 4.93 USD in USA. The country is developing rapidly economically as well as socially. In 90’s it used to be a ruined post-Soviet state with poor communication system, turbulent political environment, and high criminal records. However, in 2016, Georgia was ranked 3rd by the Index of Economic Freedom. It is among top countries according to the ease of doing business (2013), least inflation rates (2013), adult literacy rate (2011), child development Index (2010), and reliability of police services (2013). Georgia is a very safe and secure country. It ranks 8th among safest countries according to the American statistical page lifestyle9.com. There are literally no banned places in Tbilisi as well as the rest of the country, except for Samachablo (South Ossetia) and Abkhazia that are occupied by Russian Federation.

Conflict with Russia is a long lasting struggle mostly consequent to Georgia’s western oriented choice. Majority of the young population is fluent with English, especially in the urban locations. Western culture is thriving among locals. However, centuries of Asian as well as Russian influence is common. Such a diversity makes Georgia an exotic experience.

Georgia is one of the oldest inhabited areas in the world. Archeologists have found pieces of human bones dating with 1.8 million years in Dmanisi, Georgia. These are considered to be first humans both in Europe and Asia. Ancestors of modern Georgian people have been here for more than 15,000 years. Already in the 4th century BC the first unified kingdom of Georgia appeared with rather advanced civilization. However, Georgia has rarely been an independent state. It was under the influence of Roman Empire for around 400 years, under Arab influence for 300 years in a row, and under Russian influence for more than 200 years. Moreover, between infrequent years of independence different regions of the country were conquered by Ottomans, Persians, Mongolians and others. Georgia rebelled against the latest occupant – Russia twice. First on May 26 of 1918, when it liberated for 3 years, and then in 1991, when finally, on April 9, Georgia declared independence and shortly elected the first president. Four Presidents have changed afterwards and the country’s political environment is gradually stabilizing, but wars and invasions seem to continue. The latest armed conflict occurred in 2008 with Russia. This war lasted for 5 days and as a result Georgia lost 1/3rd of its territories.

Dramatic history influenced Georgians considerably. In 90’s the population was declining, people in the streets used to wear black mostly, and almost every family had at least one member passed away as a result of war actions. Years have passed and people are becoming more optimistic about their future, education and democratic values are spreading across the country, though more time is required to recompense for the lost decades.

Who are these people?

There are three distinguishing traits that Georgians carry – hospitality, support, and huge nose.

It is amazing how welcoming Georgian families are, especially in rural areas. People will let you in their houses, feed you and offer sleep over because they believe that every guest is God’s messenger. Even less religious citizens of dense cities take pride in the nations welcoming attitude towards tourists.

The communities here often self-organize to support those in need or those who are considered to make the country proud. One of the latest and most touching cases is the 2015 flood that ruined Tbilisi zoo and central recreational park as well as several dwellings and took away lives of innocent people. Thousands of young people gathered together to support victims of this natural disaster. They saved lives, donated their possessions, and worked hard for several days to help those in need.

As for the noses, it might be hard to notice because the top plastic surgery in the country is rhinoplasty.

Kartuli (Georgian) is an official language in Georgia. Some of the words sound like a caveman’s speech, due to ancient roots, but nevertheless the language is so melodic. It is spoken in all regions, however Megrelians, Svans, and Abkhazians have their own languages as well. There is another Kartvelian language spoke by Laz people – ethnic Georgians living on the territory of modern Turkey. Georgian is a truly unique language.

Unique language needs its own unique system of writing. If you would like to learn Georgian Language, you should visit this great webpage: Learn Georgian Alphabet. Probably every single Georgian takes pride in the nation’s exceptional alphabet. Locals might tell you that letters resemble the shape of vine or that each letter has a circle as a base. You might also be told that Georgian alphabet was created by an Armenian scholar or that it was influenced by Greek alphabet. No matter what, the following are facts:

Good news is that most of the street signs, restaurant menus, name boards of popular locations, and even outdoor advertisements will feature English translation, so you won’t have to bother learning Georgian letters, unless you feel the urge. However, there are some words and phrases that are strongly advised to memorize:

Is it really a foody heaven?

Georgian food and wine culture is best observed through Supra – traditional feast featuring a wide array of assortment of dishes always accompanied by large amounts of wine, lasting several hours. Supra is a highly conservative ritual with some obligatory rules. It is led by a chief person – Tamada, who initiates toasts. Tamada is usually a respected guest or a close friend of the host. Supra is accompanied with longest toasts you’ve ever heard, folk songs and dances.

Traditional wine is always present at Supra. Georgian wine is something you have never tasted before. Grapes are crashed together with skin and then vinified in clay vessels buried under the ground. These vessels are called Qvevri. They are thoroughly washed and waxed from inside. This gives Georgian wine a darker color, a bit oxidized tones and some tannins.

These people have the moves and tunes

Despite Soviet influence, Georgia not only maintained its cultural authenticity but manages to further develop towards modern tendencies. Folk music and dances are of high importance for locals, but Georgians, particularly citizens of Tbilisi have developed an incredible culture of electronic music. Terrific nightlife is something worth mentioning when speaking of Tbilisi. However, Tbilisi is also popular among rock music and jazz lovers as several interesting annual festivals are held permanently.

There are very few countries in the world with such a developed cultural heritage. Georgians are proud of their poetry, painting, cinematography, theatre, opera, architecture, craft but above all – folk songs and dances. In 2001 the UNESCO recognized Georgian songs as a masterpiece of oral immaterial heritage. Georgians truly have amazing polyphonic songs.

What else should I consider?